As they say, when it rains, it pours...and it's pouring a little here!  I missed a couple weeks of working due to a back strain injury, which took a couple weeks to heal up, but now I'm back to work, catching up to a bunch of deadlines that are upon me!

In no particular order, here are the items I've been working on for customers.  Pardon the blurry pictures--I need to make improvements to the hanging and lighting situation I've got here at Ye Merrie Quiltery.

Judy J., owner of Thread Mongers, asked me to finish up this quilt with one of the threads she sells in her shop, Valdani hand dyed color #86.  It's a 30 wt. thread, so it's about as heavy as the Signature thread.  Usually I use a 50 wt., so I had to make adjustments to the tension and speed, as well as waxing the tension discs a bit to help the thread glide through.

Since this was a Halloween-themed group of fabrics, it only made sense to sew a bunch of pumpkins and vines all over the surface!  I found this pattern on Leah Day's 365 Quilting Patterns, from her blog, www.freemotionquilting.blogspot.com.  I love her site with the variety of patterns and videos on how to execute each of the patterns.  Here's a detailed shot of the quilting--very simple loops, circles and lines.

This is a quilt that is currently on the frame for Marlys, who is the mother of Linda D., the lady who brought me two baby quilts a couple months ago.  This is a gift for a grandson who is going off to college.  She made this flannel quilt in the school colors, and I'm quilting it with a medium stipple in the main body of the quilt, with some special details in the black border and corners.  More pictures will be posted later when this is finished.

Kathy C., a new customer, but the mother-in-law of an acquaintance in the SCA, sent me three quilts to work on.  This one is due back in her hands next week, but I'm having trouble connecting with her.  Payment apparently got lost in the mail, so I've been waiting to mail it to her.  Hopefully it'll arrive Monday so I can get it back to her in time for the auction or raffle that this will be in.  This has just a basic stipple all over.

This is the second of three quilts for Kathy C., also finished fairly quickly using a modified rose pattern from the 365 site.

Details of this quilt show the pattern of roses; a squiggle roughly flower shaped and a spiral into the middle of the flower.

Karen M. handed me this amazing work of art to stitch feathers all over.  Having practiced on a King size quilt for myself, I felt confident that I could do it justice.  I did a slightly different feather with hers than I did with mine, but it seemed to call for it...or rather, it's just the way it started looking, so I went with it.  I have a belief that some quilts "talk" to you; not that I'm actually hearing voices, but I can envision what it needs.  The big trick is to get your vision executed into your project.

This looks more pink than it really is--I will have to make adjustments to the lighting that I use to take pictures, as well as a place to hang them up with good angles and light.  While this is hanging on the wall, it's clearly not tall enough to display anything this long and the lighting in this room is abysmally poor.  I am also not a professional photographer...I may have to ask a few photo friends for some tips!
Posted by karen at 10:37 PM No comments:

I have several quilt tops that have crossed the machine recently.  Starting with this auction quilt that my sister made for her daughter's school.  The kids in the school made the white blocks, adding images and their favorite scriptures, and she off-set it with a pieced border and sashing between.  It spent so little time at my house that I didn't have a chance to photograph it when it was finished. 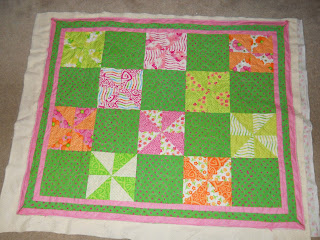 Then my customer, Linda D., called me up and asked if I had time to do a pair of baby quilts.  Not for a pair of twins, but for two friends who are having babies at the same time.  One is known to be a girl, but the other is of unknown gender.  So the first she made with green and pink, so I quilted it with loose artsy roses.  It quilted up like a dream, and I added the flannel binding to the edge.  The flannel was a little trickier to work with.  Grrrr... 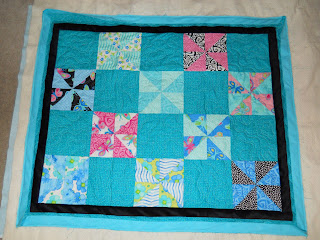 The second baby, due to its unknown status, is going to receive a more gender-neutral color combination.  The quilting is similar, which I told her could be roses or snakes...depending on the gender.  The outer border is black minkee, which has some issues with stretching.  The blue binding went on easily, although there was just barely enough of it. 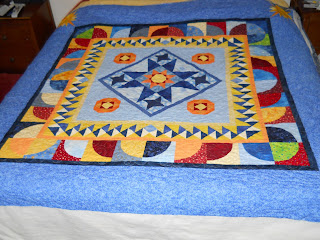 Lauri gave me a quilt to work on for a raffle for a cancer fundraiser.  I don't recall which organization it is supporting...sorry. 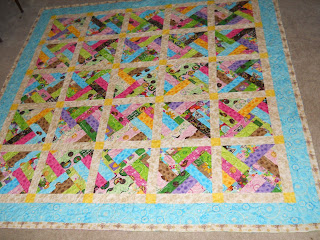 I also put my daughter's Girl Scout quilt on the frame to finish up that quilt for her.  It still needs binding, but she's very excited that it's almost done!  I have to dig around and see what I have for binding fabric.  I think I have enough of one of the green fabrics I used on the back.

The most recent project, I've been quilting up some pieces for Quilts of Valor that were brought to me by Kathy W.  She provided the tops and paid for the backing material.  I'm hoping that they can also spring for the batting, since that costs $8.50 a yard, but the time and thread I can happily donate.  There are five in this series...sorry they're sideways. 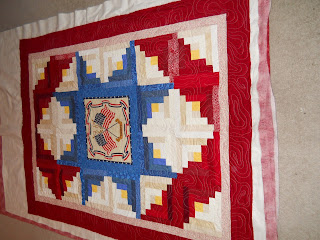 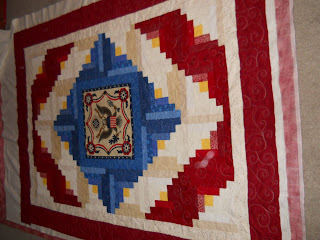 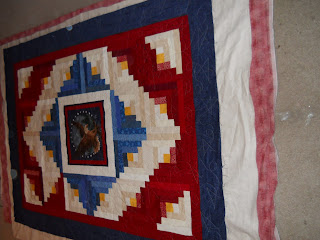 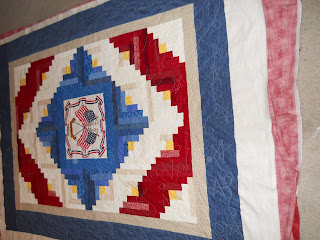 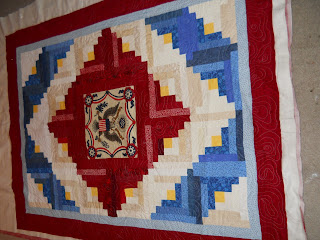 Not sure what I'm going to do about my camera...apparently it got jostled around in my purse and now the screen is busted.  2/3 of the screen is black, so I can't see what I'm snapping and I can't turn off the flash now.  I just got it a year ago...frustrated that I may have to replace it already.

My next project may be quilting up the 9-patch scrappy top that I put together a few months ago.
Posted by karen at 11:42 PM No comments:

A number of quilts have come and gone, as some weaving as well!  I'm not just a quilter, I also do a number of other fiber arts.  I have made socks, tunics, and tablet woven bands.

Here a 14th century book of hours illustration features a woman weaving a band on an upright loom.  It looks like tablet woven bands, but it's hard to make out the details.  In her left hand are the four-hole cards, and she has a heck of a beater in her right hand.  I'm unclear how the other end of the weaving is set up on that vertical piece of wood...what is it for?

Of course, I don't use a loom like this to weave my bands--I use an inkle loom.  I've made around 12 pieces so far, selling a few, giving a few away, and keeping a few for myself.  These are some of the pieces that I took to the recent medieval faire.

Recently, I made a test piece based on a 6th century Norwegian pattern.  It's a short band, measuring only about 1 3/4 yards, but I have already been asked to weave another for a woman in green and gold.  That'll be next after I finish...

...this band!  This is a double-sided "Anglo-Saxon" band that I found online.  I suspect that it may be documentably period, given that the author of the web site I found called it Anglo Saxon, however, she did not list the date or source of the pattern.  It may be in a book that I do not currently have access to--it's out of print and there are no booksellers that I can find that currently carries it.  More research is needed to find out more information about this pattern...as are 25 pairs of fishing spinners to help untwist this mess...all the cards continuously turn in the same direction.

Over in the quilting zone, here are a few of the quilted pieces I've finished lately:

Monkey Madness!  This was actually a two-sided quilt.  This panel with the borders on one side, and a pieced quilt on the other.  For some reason, I can't find the photo of the other side.  Clearly, I'm a quilter, not a photographer!

For Malcolm!  My nephew was born on the last day of January.  I finished the quilt for him a couple weeks before he was born and got an opportunity to deliver it to the new family in person.  Barring any miracles, he is the last of the cousins to be born.  I still owe him one more quilt that my sister and I are going to make together in the near future.

Blue and white...like jeans and t-shirts...reminds me of cowboys!  I like cowboys...  This is a great scrappy blue and white that didn't photograph as well as it could.  Remember that bit about not being a photographer?  Besides, I took the picture with my phone, which is not the greatest. 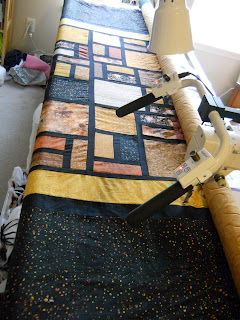 Unfortunately, I haven't gotten good pictures of a few more recent pieces I was working on.  One of them I completely forgot to take a photo of when it was finished!  All I have is a picture of it in process.  These were some really lovely fall colors!  Just makes you want to go bake a pumpkin pie!  She just wanted a simple stipple over the surface, which I debated whether to do it in gold, black or grey.  In the end, it was the black thread that looked the best.

Next on the frame is a Sounders Fan Baby quilt.  Rave green and blue!  It's really a great pattern and the colors are bright and cheerful.  I'll be cheering in those colors soon!  Go Sounders!

In the wings are five pieces for Quilts of Valor and four that will be given to patients at Children's Hospital, plus a few quilt tops for myself that I finished recently.  One of them is a UFO that's at least 10 years old.  Note that this quilt is pinned to the log cabin quilt hanging on the wall--again, photography skills lacking.  I started making this when my middle daughter was not quite 2.  She's now 11.  Time to finish this up and get it on her bed!
Posted by karen at 11:46 PM 1 comment: